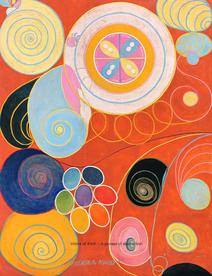 The exhibition “Hilma af Klint: A Pioneer of Abstraction”, which was first shown at the Moderna Museet in Stockholm in the beginning of 2013, is without a doubt the most encompassing presentation of af Klint’s art to date. It required a long period of preparation, during which the cataloging of her oeuvre was completed by a team at the Moderna Museet, led by one of the senior curators, Iris Müller-Westermann, assisted by Jo Widoff. While the project was driven by the Moderna Museet, it was conceived as a touring exhibition and thus included collaboration with Hamburger Bahnhof in Berlin and the Museo Picasso in Málaga. All the artworks belong to the Stiftelsen Hilma af Klints Verk, the foundation created to administrate her oeuvre.
The exhibition’s purpose is to give Hilma af Klint the unequivocal institutional recognition she deserves and to introduce her art to a broader public in Sweden and beyond the Swedish borders. This is clearly stated in the foreword to the exhibition catalogue, in which the directors of the three museums wrote:
“Hilma af Klint is one of the truly great artists of the twentieth century and she has been kept waiting far too long for recognition. Thanks to a uniquely fortunate collaboration […] her oeuvre will at last be presented to the broader public. […] Hilma af Klint was a pioneer of abstraction. […] Her paintings have been included in a few exhibitions in recent years, admittedly, but this joint touring presentation will be the first to give Hilma af Klint the international breakthrough her oeuvre deserves.” (15)

After Stockholm, Berlin and Málaga, “Hilma af Klint: A Pioneer of Abstraction” is now on view at Louisiana, Copenhagen’s museum of modern art.[1] In Louisiana, the exhibition’s progression is nicely articulated. The colour-setting conceived by Nils Erik Gjerdevik is noteworthy as it is skilfully balanced and works very well with the artworks.
The four contributions in the catalogue are all concerned with understanding why and how Hilma af Klint arrived to abstraction so early and despite her isolation from the avant-garde. In “Paintings for the Future. Hilma af Klint: A Pioneer of Abstraction in Seclusion” (33-51), the exhibition’s curator, Iris Müller-Westermann, introduces the reader to the main issues and topics. Hilma af Klint’s artistic practice is inseparable from her quest for spiritual knowledge and her communications with spirits. Though she realised non-figurative paintings as soon as 1906, her artworks cannot be described as formalistic but represent what Müller-Westermann calls “spiritual contexts” (50), i.e. structures and connections that exist beyond the visible realm. This introduction is completed by a conversation between the curator and Helmut Zander about spiritualism, theosophy and anthroposophy, entitled “There is no Religion Higher than Truth” (113-128). Establishing direct links between her passage to abstraction and her occult beliefs and practices appears to be rather difficult but the authors confirm that numerous concepts used by the artist correspond to the ”theosophical Zeitgeist” (127). In his article “Premonitory Abstraction – Mediumism, Automatic Writing, and Anticipation in the Work of Hilma af Klint” (161-175), Pascal Rousseau connects abstraction to “the spiritist path” by demonstrating that the latter permitted to “anticipate” the former (172). He examines what this anticipation of abstraction through mediumistic activity entailed for the artist in terms of subjectivity and gender-identity. Finally, in “The Botanical Roots of Hilma af Klint’s Abstraction” (223-241) David Lomas studies the links between, on the one side, botanical motifs, which are omnipresent in her work, and, on the other, abstraction. He then situates her in a wider context, a network of connections between plants and the spiritual at the turn of the 20th century, such as “vitalism”, a doctrine that postulates “an animating spark or soul that distinguishes organic life from mere lifeless matter” (232). Overall, in this exhibition catalogue, af Klint’s transition to abstraction is presented as being undeniably linked to the artist’s receptivity to occult phenomena and ideas (113).

In Sweden the exhibition was a great success and generated numerous press articles. [2] They often re-ignited the debate that has followed Hilma af Klint’s art since some of her works were first exhibited in Los Angeles in 1986. [3] It revolves around two complementary interrogations: what her place in art history should be, and what her artworks imply for the interpretation of abstract art. Can Hilma af Klint be called “a pioneer of abstraction” and be given a similar status than Kandinsky, Mondrian or Malevich in the history of modern art? Or is she rather an exceptional case, which from the margins can shed light on the sources of abstract art? Oscillating between an artistic and spiritual pole, the debate’s central dilemma is to know whether Hilma af Klint was first and foremost an artist who was inspired by occult theories, or a mystic and medium who expressed herself pictorially.
The polarized manner in which the question is posed reflects the definition of modern art that sustains it. Art is conceived as an autonomous activity subordinated to nothing but itself. In this perspective, any form of art that implies the subordination of the artistic exigencies to the expression of a predetermined “message” cannot fall under the category of “modern art”. That is why religious art and modern art are commonly considered as being mutually exclusive. Hilma af Klint’s works are indisputably spiritual. The artist’s herself wrote that they “portray the astral plane in colour and form”. [4] According to Åsa Nacking, her esoteric paintings are “systemic visualisations of complex philosophical ideas and spiritual notions”. [5] Beyond their spiritual symbolic content, her paintings also possess a spiritual function. As Birnbaum and Noring wrote in “The Legacy of Hilma af Klint”: “Her imagery was intended to lead the viewer to other levels of awareness, […] to glimpses of another universe.” [6] Finally, it is significant that in her lifetime af Klint never exhibited her occult paintings in an art museum or a gallery but she rather envisioned to show them at the Goetheanum in Dornach, i.e. in a spiritual place. [7] If the criterion for a visual artefact to qualify as “art” (understand “modern art”) is its autonomy, it follows that Hilma af Klint cannot be integrated in the history of modern art. Such reasoning is still common. For instance, in his review of the exhibition, the Danish art critic Rasmus Kjærboe referred to af Klint’s paintings as “non-art” because of the predominance of the symbolic “message” over the purely artistic. [8] His Swedish colleague, Jonas Magnusson, suggested in his own review that the title “diagram artist” would suit her better than “abstract artist”. [9]

In the exhibition and its catalogue, a preference for the artistic pole at the expenses of the spiritual is sometimes noticeable. It appears, for example, in the way Pascal Rousseau concludes his text, writing: “They confirm the performative radicalism of Hilma af Klint’s artistic act, which, looking beyond the genealogy of intentions, makes her a pioneer in the history of abstraction. An artistic forerunner.” (173). The way the paintings were selected for the exhibition and how they have been displayed is also revealing. As Gertrud Sandqvist noticed, only one series was presented in its entirety and sometimes the works from a series were not hung in order, even though they are precisely numbered. [10] This is problematic because Hilma af Klint worked in series and the evolution from one painting to another was deeply meaningful to her. Therefore, Sandqvist sees the curator’s choices as a lack of respect for the way af Klint considered her own art.
However, other aspects of “Hilma af Klint: A Pioneer of Abstraction” indicate a distancing from the usual “art vs. spiritual” polarization. The exhibition’s curators and the catalogue’s authors present af Klint as a great artist without devaluating or neglecting her spiritual engagement. On the contrary, the spiritual aspect is acknowledged as an essential component, and is considered seriously and studied in each of the catalogue’s contributions. Af Klint’s paintings are exhibited as spiritual art in a museum of modern art. The apparent paradox disappears if one considers the shift in the study and display of art from formalist art history to anthropology of art and cultural art history. [11] As visual culture and ideological contexts have become crucial sources of insights, twentieth century art history has been more opened to components that are not strictly artistic, such as the spiritual.

Hilma af Klint’s inclusion in the 55th Venice Biennale in 2013 reflects such a change. Five of her paintings were presented in the Biennale’s main exhibition, “The Encyclopedic Palace” that set out to explore how artists imagine and dream about another reality or worlds beyond reality. [12] Af Klint’s presence in this event dedicated to contemporary art was not problematic because the curator, Massimiliano Gioni, adopted an anthropological approach to the study of art, which involved blurring the lines that usually mark the separation between conceptual categories – for instance: modern and contemporary, images and artworks, art and non-art.
Among other things, contemporary artists’ relations to Hilma af Klint can help understanding the recent increase in museological interest in her art. Already in 1998, Daniel Birnbaum drew a connection between a contemporary Swedish artist, Carl Michael von Hausswolff, and Hilma af Klint on the basis of the “impurity” of their art. [13] He defined both of their artworks as “hybrids” that transgress the borders of the concept of “pure” and “autonomous” art. Today, Birnbaum is the director of the Moderna Museet and played an important role in organizing this retrospective. In connection with the exhibition of her five paintings in “The Encyclopedic Palace”, he also edited with Ann-Sofi Noring “The Legacy of Hilma af Klint”, a book for which nine contemporary artists were invited to create a work in response to af Klint’s notebook from 1919, “Flowers, Mosses, Lichens”. [14] The original notebook, which is entirely reproduced here, is filled with non-mimetic drawings that represent each plant’s spiritual essence and the spiritual forces at play.

Earlier the same year, another exhibition at Lunds konsthall, in Southern Sweden, juxtaposed a series of drawings made by af Klint in 1917 with artworks by contemporary artists. [15] Entitled I strömmen / Channelled, this exhibition gathered the works around the concept of inspiration. In the catalogue, the curator, Gertrud Sandqvist, analyses the content of af Klint’s numerous notebooks in order to better understand her creative process. She notes that her way of creating based on messages or visions involves “taking a break from one’s own Self, with its intentions and plans” [16], a method of creation actually shared by many artists.
“The time is ripe for Hilma af Klint”. [17] Indeed, her art possesses a contemporary resonance and attracts many artists, as the projects mentioned above have proved. Her current relevance stems from several elements: her ambiguous position between artist and medium, artistic and spiritual; her evolution outside of the art world and the lack of a market value; and the spiritual dimension itself. Indeed, the interest in the spiritual and occult, as well as in modernity’s link with the irrational, is increasing. However, the relations these artists have established with Hilma af Klint are diverse and in “The Legacy of Hilma af Klint” as well as “I strömmen / Channelled” they are presented loosely. An in-depth study of their relations has yet to be done.