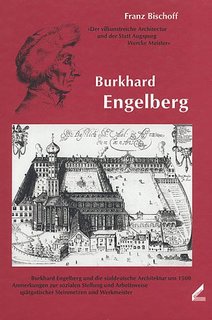 A condensed version of the author's prodigious doctoral dissertation (University of Bamberg, 1987), this still quite sizable book examines and contextualizes the life and work of Burkhard Engelberg (ca. 1450-1512), one of the most prolific south German architects of the late Gothic period. Though mostly active in Augsburg, where he was a contemporary of Hans Holbein the Elder and Hans Burgkmair, Engelberg also received commissions from as far as the Tyrol and western Switzerland. This first major study on the architect was certainly long overdue. Until now scholars have had to rely on Norbert Lieb's brief biographical sketch (in: Lebensbilder aus dem Bayerischen Schwaben, 3, 1954, 117-152), and a series of smaller articles by Bischoff himself; these mostly appeared in local antiquarian journals, and were therefore difficult to access abroad.

Bischoff's new book is impressive both in terms of its scholarliness and in the wide range of issues that it succeeds in exploring. His narrative is divided into six principal chapters, which illuminate Engelberg's biography, as well as the buildings he designed, within the broader framework of later medieval social and economic history, architectural theory and practice. Although also containing a number of perceptive, if somewhat dry, architectural analyses, the main strength of this publication lies in its author's phenomenal knowledge of the primary sources, especially of the archival material, such as tax records, guild and trade regulations or masonic conference stipulations. As such, it provides a welcome complement to Martin Warnke's "Bau und Ueberbau. Soziologie der mittelalterlichen Architektur nach den Schriftquellen" (Frankfurt am Main: Suhrkamp, 1976), which primarily deals with early and high medieval documents.

The monograph begins with a comparative evaluation of the surviving textual sources on the architect's personal, financial and social circumstances. Engelberg first appears in the Augsburg records in 1477, already working as a "Parlier" (i.e. a qualified mason) for the abbey of Sts. Ulrich and Afra. Sometime between 1492 and 1495 he was made "Stadtwerkmeister" (Municipal Master of the Works), and thereafter monopolized building activities in that Swabian city until his death in 1512. Owing to his professional position and architectural proficiency, Engelberg enjoyed a high social standing, and, possibly thanks to his additional occupation as a purveyor of workable stone (not found locally), also managed to accumulate considerable wealth. Bischoff's meticulous research in the Augsburg tax lists has yielded some astonishing statistics: in 1504, for instance, Engelberg declared a taxable estate of 1850 florins, an amount which makes other resident artists such as Gregor Erhart, Joerg Breu and Daniel Hopfer look like virtual paupers (each could dispose of sums between 35 fl. and 160 fl.). Some of this chapter's findings, especially as regards the professional evaluation of Engelberg by his contemporaries, are deepened in the rather short - and somewhat oddly placed - Chapter 4.

Chapter 2 considers some of Engelberg's Augsburg commissions within the context of local patronage and municipal building regulations. Engelberg's contributions to the Augsburg cityscape included work on the tower and cloister of the cathedral (1488, and later), the conventual buildings of the Dominican nunnery of St. Catherine (which was to house the famous cycle of virtual pilgrimage paintings executed by the workshops of the elder Holbein and Burgkmair; 1498-1503), the Augustinian collegiate church of St. George (1494-1505/6), as well as a number of commercial and residential houses for the Augsburg patriciate, most notably for the affluent Fugger family. Bischoff also tentatively credits Engelberg with a share in the planning and construction of the so-called Fugger Chapel near St. Anne's (1509-12; consecrated 1518), an exquisite Italianizing edifice often considered as the first complete building of the Renaissance in Germany. The possibility of Engelberg's involvement in either the design or the execution of the chapel has previously been rejected by Bruno Bushart (Die Fuggerkapelle bei St. Anna in Augsburg. Munich: Deutscher Kunstverlag, 1994), partly because Engelberg allegedly favored only late Gothic forms. Bischoff demonstrates however that as both "Stadtwerkmeister" and quasi-'house architect' of the Fugger family Engelberg and his workshop would have been difficult to circumvent with such a prestigious commission; this argument is corroborated by a number of mason's marks, which occur both on the Fugger Chapel and some of the buildings positively known to have been erected under Engelberg's direction. As far as the architect's supposed 'stylistic obstinacy' is concerned, Bischoff justly draws attention to Engelberg's contemporary Benedikt Ried, who could very well work in both 'Gothic' and 'Renaissance' idioms.

With his reputation on the rise, Engelberg's expertise was also called upon by numerous non-Augsburg patrons; in particular, he seems to have recommended himself through his effective handling of problems in statics and his flexibility in providing vault and tower designs for quite a variety of architectural enterprises (Chapter 3). His name appears in conjunction with some of the most significant building projects in Swabia and the Upper Rhine, Switzerland and the Tyrol, either as contributing architect or architectural consultant. These ventures comprised St. George in Noerdlingen (1495ff.), St. Kilian in Heilbronn (1508), Berne Minster (1507-8), the parish churches of Bozen/Bolzano (1500ff.) and Schwaz (1509ff.), and possibly also Constance Cathedral (1502). Most importantly, however, Engelberg was appointed leading "Werkmeister" at Ulm Minster in 1494 and entrusted with the crumbling structural legacy of that Brobdingnagian edifice, begun a little over a hundred years earlier. His reinforcement of the foundations of the cyclopic west tower and the division of each side aisle by an additional arcade literally saved the building from more or less imminent collapse.

Chapter 5 zooms in on the building that is most famously associated with Engelberg - the abbey church of Sts. Ulrich and Afra in Augsburg, begun in 1474/5 under Valentin Kindlin, but continued under Engelberg's supervision from about 1477 onwards. A Benedictine foundation, and shrine to numerous local saints, the compound experienced an intellectual Renaissance in the wake of the so-called Melk Monastic Reform during the second half of the 15th century. Bischoff's substantial examination of the abbey's new church - his architect's 'Hauptwerk' - shows how architecture and monastic ideology could be inextricably interwoven. With its lay-out wrapped around the funerary topography of its Romanesque predecessor - and thereby accomodating the abbey's recent need to promote its own hagiographical past - Engelberg's church is a large, three-aisled basilica with 'internalized transepts', measuring nearly 100m in total length. Like other Augsburg churches, Sts. Ulrich and Afra was primarily constructed from brick, with only the aesthetically pronounced or semantically elevated parts being made from expensive ashlar stone. These components included windows, exterior gables, vaults, portals and furnishings, such as the complex, microarchitectural baldachin over the tomb of the Carolingian bishop Simpertus, who, thanks to the efforts of the current abbots, had finally been canonized in 1468.

The following chapter (6) provides an in-depth analysis of the working methods of both Engelberg and the late Gothic master mason in general. Bischoff presents evidence for Engelberg's possible use of three-dimensional architectural models for the demonstration of his plans to his patrons. Hans Hieber's wooden model for the pilgrimage church of the "Schoene Maria" in Regensburg, of 1519/21 (Regensburg, Stadtmuseum), gives an approximate idea of what such a scaled-down prototype might have looked like. There also is a section on the interconnectedness between architecture and metalwork, and the often collaborative role both crafts played in the design particularly of miniaturized architecture, such as portals, fonts, choir screens and sacrament houses; between 1503 and 1508, for instance, Engelberg supervised the erection of the no longer extant sacrament house of St. Maurice in Augsburg, a piece of liturgical small-scale architecture of possibly considerable proportions, for which the Augsburg goldsmith Joerg Seld supplied the necessary plans. In the thematic context of this chapter it is perhaps unfortunate that Bischoff was obviously unaware of the reviewer's own dissertation, which deals with the problem of cross-mediea fertilization 'in extenso', also in relation to Engelberg's workshop and entourage (Staging the Eucharist: Late Gothic Sacrament Houses in Swabia and the Upper Rhine. University of London 1996).

Bischoff's narrative closes with a series of brief biographies of the most eminent members of Engelberg's workshop (Chapter 7). One of them was the able and trusty Lienhard Aeltlin, who had already assisted (and often represented) Engelberg while working on Ulm Minster, and who continued to supervise building activities there after Engelberg's death. Probably the most outstanding "Parlier" of Engelberg's lodge was Stephan Weyrer, who was appointed "Stadtwerkmeister" of Noerdlingen in 1507, and who, among other architectural projects in that city, completed the immense hall church of St. George, for which Engelberg had supplied the complex vault designs in 1495. Hardcore architectural historians will be pleased to know that this chapter terminates with a contextual assessment of the mason's marks used in Engelberg's shop (over two hundred are listed in the appendix). The author's discussion of this physical evidence is exemplary, both in its historiographical astuteness, and in its critical interpretation of these marks as practical tools for the architectural scholar.

This is an important book, not only for its groundbraking research on an unjustly neglected architect and the contemporary contingencies of his trade, but also for its broad, interdisciplinary perspective and methodological versatility. As such, the study furnishes a corrective to the current discourse on late medieval German architecture, which, apart from a few notable exceptions, appears to have relapsed into a state of (often unreflected) Woelfflinian formalism. Other than appealing to the architectural historian, Bischoff's findings should also be of interest to all those with a professional focus on the arts of southern Germany during the last decades before the Reformation. One warning must however be issued: The book's ca. 2,500 footnotes and long quotations from original documents (in the main text!) will defeat the casual reader, demanding a good deal of work and stamina. The reviewer certainly has found this scholarly tribulation both pleasant and worthwhile, and is confident that other readers will agree with him in this. He is also looking forward to the author's next project, an examination of medieval masons' contracts, which promises to be at least as all-encompassing as the present tome. According to Bischoff's own words, his working database already contains about five hundred such documents.