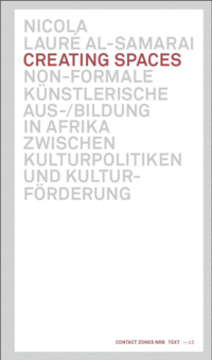 Since the early 1990s, international interest in Contemporary African Art has been ever growing. However, the conditions of artistic production in formerly peripheral regions are only now starting to attract in-depth scholarly attention. Consequently, the politics of artistic education in the highly diverse African contexts and throughout different moments of the “short” 20th century are currently emerging as new fields of study at the intersection of global art history and historiography.

The new comparative case study “Creating Spaces: Non-formal Art/s Education and Vocational Training for Artists in Africa Between Cultural Policies and Cultural Funding” is a highly timely precursor in this respect. A team of authors gathered around the Berlin-based historian and cultural theorist Nicola Lauré al-Samarai has conceived of his study that focuses on the present of artistic learning in Africa and especially on non-formal art teaching. The publication compares art-pedagogical efforts by four private initiatives in South Africa, Senegal, the Democratic Republic of Congo, and Ethiopia, all situated outside of scholarly and academic contexts; Market Photo Workshop, École des Sables, Studios Kabako and Netsa Art Village encourage and facilitate learning experiences in the areas of photography, dance, and visual art. “Creating Spaces” analyses the context-specific visions, interests and approaches, which these local actors pursue amidst “a Western-dominated funding landscape” (8). This reflection on issues of funding is particularly astute because the Goethe-Institut South Africa, a major player in supporting and building capacities in arts and education on the African continent, commissioned this study to the Institute for Art Education, a department of Zürich’s renown art school ZHdK.

Despite the pragmatic brief to obtain information and give orientation for future funding decisions, the study breaks new ground by deploying a highly transparent style of writing and structure, thus undertaking a valuable attempt to outdo the hierarchical and globalized gaps in discourse. In a refreshing critical reaction to these power structures, the authors recur to novel and intentionally “unorthodox” (135) forms of representing the gathered data. For instance, one chapter of the study is entirely written from the perspective of the founders of Keleketla! Library in Johannesburg, South Africa. By thus disrupting the representational mode, the authors draw attention to the “post/-colonial” (18) entanglements in which cultural funding, as well as scientific representation continue to be caught up.

“Creating Spaces” begins with the observation that cultural education and the formation of artists are two closely interlinked fields of action. In order to overcome the deficiency of earlier research on these overlapping fields, the publication offers a nuanced analysis of the ways in which ‘art’, ‘culture,’ and ‘education’ are addressed in official statements, in the press and in the very scarce research literature on the matter in Africa. In addition to identifying a number of gaps in criticism and raising various new research questions, the authors convincingly show that recent African communiqué and survey literature tends to reproduce overpowering Western-generated paradigms. For instance, the adoption of neo-liberal discourses on ‘Creative Industries’ and on ‘Culture and Development’ has led to the idealisation of the cultural entrepreneur, a chameleonic if not opportunist artistic role model. Cultural entrepreneurs are expected to tackle social, economic and heritage-related challenges in their surroundings upon their own ‘creative’ initiative. Urgent matters like cultural education as a form of civic education and educational reforms remain invisible in these Western-derived narratives.

In the study at hand, the private initiatives are placed in opposition to academic institutions as the sole agents in the field inventing and developing up-to-date, site-responsive pedagogic solutions for both cultural education and artists’ training. Lauré al-Samarai describes how in the professionalization courses conceived by these organisations aspiring artists are given “extended access to knowledge” (161). This “knowledge” is composed of technical skills, as well as of indispensable proficiency in terms of administration, fund-raising and project management. Additionally, the students are differently encouraged to develop their visual literacy and with it their criticality, while also learning how to situate themselves intellectually within their respective artistic field in order to be able to make “informed references.” (161) Preferred pedagogical formats to achieve this skilling are modular teaching units with changing teachers and regular peer critique sessions. According to the authors, these informal training settings with their typically horizontal teacher-learner relationships can be easily distinguished from those in the academic institutions on the continent, which tend to perpetuate colonial-time didactics.

“Creating Spaces” also draws attention to the efforts of the private initiatives under scrutiny to anchor their pedagogic interventions in the local and its histories. For instance, as part of their training, students are encouraged to investigate the immediate surroundings of the venue with their cameras or in their performances. In this respect, the initiative’s pedagogic activities run parallel to their investment in “space-making”, as their promoters intend to “establish liberating artistic, cultural, social, cognitive, and professional spaces” within “constrained and constraining framework conditions” (145).

On the basis of their field research, Lauré al-Samarai and her colleagues have several conclusions in regards to the structural conditions of non-formal educational work in the arts in Africa. They deplore the interstitiality of the discursive space in which this work takes place. The “unglamorous task” (219) of operating between art, culture and education is considered a major challenge in the initiatives’ attempts to access consequential funds for staff, venues and infrastructures. This holds all the more true since they depend for the most part on international funding bodies that rely on a neoliberal, shortsighted project logic and on narrow definitions of fields of support (art or education). And although there is evidence of energy-intensive tactics to counter-balance the chronic limitations of support and the impossibility to engage in any long-term planning on the part of the private initiatives, a change in funding policies is of vital necessity since structural funding remains “an indispensable stabilizing factor” (132) that would enable these important educational initiatives to work sustainably on the long run. This sustainability is desirable not least because “[t]he deliberate combining and intersecting of ‘education’ and ‘art’ generates multilayered, dynamic interaction spaces wherein diverse people and social environments come into contact and the production and transfer of knowledge is carried out in several directions.” (149) Therefore, the final chapter of the publication gives recommendations to funding bodies on how to become viable partners in this dynamic and much-needed field of action. Here, the authors suggest the instalment of special funding programmes that respond to the needs of the informal sector of art/s education in flexible ways, besides proposing interventions linking the informal with the formal sector. However, they also stress the necessity to preserve the critical space and the autonomy of the agents that are operating informally.

“Creating Spaces” is a much-needed analysis and a noteworthy effort to grasp the complex and evanescent nature of learning processes in the arts today. It is a stimulating read for anybody invested in present-day education and art on the African continent and beyond. The handy book comes in three languages, is smartly designed and has a small section of beautiful colour images that document the pedagogic work at the different venues. However, especially for art historians, this book reveals that there is much more work to be done. Future studies should analyze the specific historical contexts in which these organisations operate and their aesthetic traditions. More direct confrontations of the ideologies of formal educational systems that have outlived colonialism are needed, as well as more concrete examples of the artworks emerging from the informal sector. But as a pioneering publication, “Creating Spaces” has skilfully mapped out the new field of research and the nuanced considerations that have to accompany any future studies.