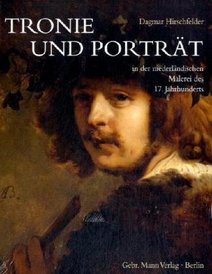 Some critics use the word 'tronie' as the name of a genre comparable to that of landscape or portrait but this a recent development, not justified by the way in which seventeenth-century sources apply the word. Hirschfelder rightly concludes that we don’t have a useable definition for this class of paintings yet, and she tries to find it by studying the similarities and differences between tronies and related groups of paintings. Every single aspect of this limited subject is carefully analysed and this monolith of solidity and thoroughness could be considered a classic in the field of art history, if only an editor had been hired to reduce its text by 30%, reorganising it and making superfluous the many repetitions that seem to be unavoidable in the book’s present structure. This is my main objection to an otherwise admirable book.
The author concludes that the makers of 'tronies' aimed for the depiction of highly interesting types of figures with characteristic physiognomies, and at the same time tried to demonstrate their virtuosity in all aspects of their craft. She states that the 'tronie' originated in Leiden and Haarlem in the third decade of the seventeenth century, where Jan Lievens, Rembrandt and Frans Hals were its inventors. This choice implies a definition: a painting is a 'tronie' when it has the characteristics these three artists gave to their 'tronies'. The author’s criteria are mostly negative; a 'tronie' is a head or a half-figure without significant attributes or actions, not identified as a figure from history, literature, mythology or the Bible. The face is not stereotyped as the representative of one of the social or psychological groups we know from genre painting, such as the quick-tempered 'Capitano', the miser or the glutton. Although the model can be identified in some cases, the 'tronie' is no portrait.
Hirschfelder adds one more criterion: ‘realism’ (I will come back to the use of this term). For this reason she excludes all sixteenth-century and early seventeenth-century heads, busts and half figures. They are not 'tronies', but works of precursors, the author states. Bloemaert and Van Honthorst are excluded also; from 1621 onwards, they elaborated caravaggesque examples in which lighting effects and facial expressions were studied, but the Utrecht masters characterised their protagonists by manipulating and intensifying well-known stereotypes, not working 'naer het leeven' (ad vivum). Neither did they experiment with a free and personally varied brush stroke as Hals, Lievens and Rembrandt did.
Pieter Bruegel and his son Pieter the younger are possible exceptions: some of their expressive heads may or may not have been done after life, and their example was imitated by specialists in low-life genre. Hirschfelder treats the 'tronies' of Adriaen van Ostade and others in a separate chapter as being outside her field of research. They certainly are 'tronies', but they are too easily recognised as such, whereas her special interest is the exploration of the terra incognita in between the 'tronie' and other genres such as the portrait (as the title of her book indicates). Giving Van Ostade and his predecessors from the Southern Netherlands their due would have upset Hirschfelder’s chronology, because the Brueghels were evidently earlier than Lievens and Hals.