Giovan Paolo Lomazzo: Idea of the Temple of Painting 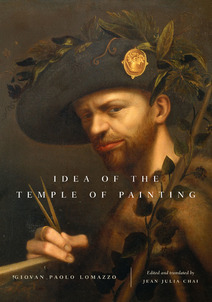 The book by Jean Julia Chai offers an English translation of the ‘Idea del Tempio della Pittura’ by the sixteenth-century painter and writer Giovanni Paolo Lomazzo (1538-1592). First published in Milan in 1590 by Paolo Gottardo Pontio, Lomazzo’s book, which was translated into French by Robert Klein some forty years ago, constitutes one of the artist’s prominent theoretical writings on the art of painting, in connection with the longer and more famous ‘Trattato dell’Arte della Pittura’ (1584), which was defined by Julius von Schlosser as ‘the Bible of Mannerism’, and of which we already have a sixteenth-century English translation by the Oxford scholar Richard Haydocke. [1] The shorter ‘Idea’ was, in Chai’s words, “written as a pithy introduction to the encyclopedic ‘Trattato’”, and it represents a fundamental step in the development of sixteenth-century artistic theory, in which the personal expression of the artist’s style becomes a key basis for the building of the theoretical discourse on painting. Although the relationship between the two books is still not clear on all points, and despite the fact that the function of the ‘Idea’ could arguably be pushed beyond the author’s label of an ‘introduction’ to the Treatise, an English translation of this book constitutes an important contribution to foster scholarly research on one of the main figures of Renaissance Italian Art Theory. [2]
Lomazzo built the ‘Tempio’ (this mnemonic image was probably inspired by ‘L’Idea del Teatro’ by Giulio Camillo) with a complex system of planets, elements and artists, in which the seven parts of Painting (‘Proportion’, ‘Movement’, ‘Color’, ‘Light’, ‘Perspective’, ‘Composition’ and ‘Form’) are put into connection with the seven ‘governors’ - a list of contemporary painters Lomazzo believed to be the most skilled, among whom he counted Michelangelo, Leonardo and Andrea Mantegna.
Given that the construction of this structure is not always consistent (as consistency proves not to be a priority for the author) and acknowledging the ambiguous and hardly fluent style of the Italian writer, the translation Chai has achieved is praise-worthy and effective. As she states in the foreword, Lomazzo usually accumulates run-on sentences with subordinate clauses, tense changes, ambiguous pronouns and erratic word order, and Chai’s choice is to “keep most of this awkwardness” in order to “reveal something of the author’s thought processes through the way ideas are juxtaposed and articulated”. This ‘authenticity agenda’ is combined with a meticulous editing when the awkwardness would otherwise hinder comprehension, and the work is magisterially achieved. Chai does not ignore the issue of translating key Italian terms such as ‘istoria’ or ‘discrezione’, and she bravely decides not to leave them in the original vernacular but to translate them into modern English. The equivalent terms she chooses are, in the reviewer’s opinion, appropriate and for the most part satisfactory. In many cases the author does not give a mere translation of these slippery artistic terms, but she provides - either in the preface or in the footnotes - an interpretation and an explanation of them. To give a couple of examples, ‘moto’ is translated into ‘movement’ with the meaning of ‘movement of the body and soul’ or ‘figurative expression’, instead of the more neutral but also less significant ‘motion’, and the even more difficult word ‘decoro’ (with the meaning of ‘appropriated to the subject’ and ‘inner harmony of the parts’) is eventually translated with the bald ‘discernment’.
Before the translation, Chai introduces the figure of the artist in a forty-page long introduction, which is both informative and enjoyable, and overall it allows the reader to get a glimpse of Lomazzo’s personality and achievements, analyzing his career from painter to academician and writer on art. Many scholars throughout the twentieth century have worked on the artist’s theoretical writings. Since their rediscovery by Panofsky (1924), they have been considered one of the most complete attempts to give painting a defined structure (Blunt 1940, Ackerman 1967, Kemp 1987), they have been taken as an example of the rise in painting’s status during the sixteenth and early-seventeenth centuries (Ciardi 1965 and 1973, Isella 1993, Williams 1997), and they have been used as evidence of the reception of Leonardo’s works (Berra 1993, Bora 1998, Porzio 1998). [3] Lomazzo’s books have also been seen as a milestone in early Mannerist art theory, and to attempt to give a complete overview of all the scholarly work done would have been a challenging task for anyone. Overall, the complexity of this figure is faithfully sketched. Last but not least, Lomazzo’s interest in subjects beyond those practical for a painter, such as natural philosophy and the occult, is quite interestingly hinted at in “The Aesthetics of Fascination” (p. 29 ff.).
Chai concludes the introduction with a brief discussion on the reception of the painter’s writings (“The Delayed Reaction”), and she includes at the end of the book an interesting compendium of images (unfortunately black and white), some of which are not widely known to people outside Lomazzo’s scholars, such as his ‘The Agony in the Garden’ (1572) or ‘The Crucifixion with the Virgin, Saint John and Saint Mary’ (1571). She also provides a useful bibliography and she adds two most practical indexes of subjects and names that are mentioned in the book. Carefully edited and practically organized, the book aims at opening the writings of Lomazzo to new audiences, and opens fresh avenues to approach this versatile author’s ideas.