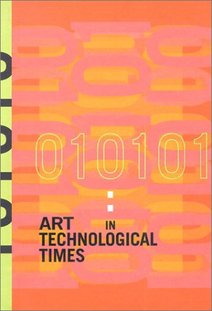 While technology may not be your best bet in the stock market these days, it remains blue chip on the Museum circuit. In the U.S., the measure of the impact of bits, bytes, pixels, plasma, interactivity, and nearly virtual everything on the world of art making can be mapped bi-coastally: no less than two major American museums have mounted ambitious exhibitions exploring digital technology: Bitstreams: Art in many media influenced by digital technology, as well as the web-based companion show Data Dynamics, run at the Whitney Museum of American Art through June 10 (see http://www.whitney.org), and 010101: Art in Technological Times (also with a web component) runs at the San Francisco Museum of Modern Art through July 8.

010101 features more than seventy-five individual works exhibited in a high-tech environment of floating white curtains and crisply framed plasma screens on which aphoristic texts by such futuristic seers as Guy Debord, Arthur C. Clarke and Marshall McLuhan shimmer like scriptural quicksand. The art itself embraces a wide range of materials and media from the sublime to the ridiculous (more often than not, no useful distinction obtains between the two). "SCUMAK no. 2" by Roxie Paine is an automated sculpture device that cranks out big red blobs of plastic, while Lee Bul's "Supernova," is a big white plastic animé-inspired thingie suspended from the ceiling. Craig Kalpakjian contributed "Corridor," a digital video that leads the viewer through an eerily empty office hallway, whose never-ending computer-generated blandness is matched by the disembodied, computer- generated perfection of the endless tracking shot. Karin Sander's "1:10 (1999-2000)" is comprised of a crowd of Lilliputian portrait- figurines produced through a complex process of computer scanning and computer-driven plastic extrusion (while the catalogue argued that this technique re-presented the sitters in "minute detail," the resulting figurines struck me as almost as bland as Kalpakjian's corridor, and somehow incomplete-as if Scotty had done a poor job of beaming them back down from the U.S.S. Enterprise). The Swiss architects Décosterd & Rahm built a "Melatonin Room," where visitors could calm down under an ultraviolet light (which increases the body's production of melatonin, a sleep-inducing chemical occurring naturally in the human body) or rev themselves back up under a high- intensity green light (which blocks the release of melatonin by the body). Avant-garde British musician Brian Eno put together a mood environment entitled "New Urban Spaces No. 4, Compact Forest Proposal," comprised of eleven cd players, grids of tiny speakers from which a host of sampled and synthesized sounds burbled in random patterns, strings of Christmas lights and a mannequin borrowed from the Gap. Sarah Sze scattered the dissected and embellished remains of a red sports utility vehicle (a vehicle of choice for the dot-com crowd) throughout the Museum's lofty atrium, adding a jazzy veneer of baroque ornamentation to its cool international style.

The possibilities for celebrating our "real world" of global capital through digital photography are to be glimpsed in two images by Andreas Gursky. On the low end, "99 cent" spatially compresses the wall-to-wall merchandise of a typical deep-discount retailer in Los Angeles into an overwhelming optical assault of brand-name commodities--more pop than Warhol's worst acid trip. On the high end, "Taipei" finds an unexpected monumental grandeur in the homogenous architecture of hotels oriented toward the international business traveler-more modernist than Le Corbusier's best utopian visions. Gursky counts among his influences the early twentieth-century photographer August Sander, as well as his own teachers Bernd and Hilla Becher. But Sander and the Bechers are distinguished by the resolutely human scale of their respective taxonomic projects. In comparison, Gursky's photographs more often than not put the very notion of scale into question. It is as if we always suspected: in a world completely given over to virtuality, spectacle and simulacra, the only adequate subjectivity will be a disembodied one. The practical impossibility of such a subjectivity (at least for now) remains the crux of the matter-it's an issue that Gursky largely sidesteps. If you can't get enough Gursky (no one can seem to these days), a 40-work retrospective is currently on view at the New York Museum of Modern Art (see also http://www.moma.org).

Linking the perception of space to time, Heike Baranowski sees the homogenizing forces of late capital differently. "Auto Scope" takes the viewer on a dizzying tour of the Parisian periphérique-a no man's land of freeway offramps, impersonal cinderblock walls, bleakly anonymous housing projects and hypermarchés, which she videotaped from the window of her car (the grand arch at La Défense makes a fleeting, ironic appearance). The resulting tape was doubled, flopped, looped and projected on two intersecting walls, resulting in an unexpectedly mesmerizing kaleidoscope-vision that is more urban than Baudelaire's 19th-century Parisian flâneur could ever have dreamed-a vision that seduces almost in spite of itself.

Of course, Baranowski's piece owes little to digital technology properly speaking (it is nothing more nor less than good old single channel video multiplied by four and simultaneously projected); its interest is more as an analogue (unfortunate word) of digital experience than as a realization of it. Similarly, Rebecca Bollinger's thumbnail- sized colored-pencil drawings of images gleaned from keyword searches on the internet (organized into more or less complete grids, with such titles as "Important Documents," "My Van," and "TV RV,") are illuminating precisely because of the collision engineered between old forms of visual notetaking and new technologies for classifying and accessing digitally stored information. Bollinger's roots lie in sixties conceptualism, especially that of artists like Douglas Huebler and John Baldessari, not the least in the way she shares Baldessari's dry and somewhat rueful wit. Her work demonstrates that the application of conceptualist practices to the new "aesthetics of administration" imposed by the World Wide Web remains a rich area of investigation. John Maeda's "Tap Type Write" seems conceived in a similar spirit (inspired by the typographic experiments of the machine age, it links the playful manipulation of futuristic-looking typographic patterns to the old-fashioned click-clack sounds made by "traditional" typewriter keys), as are Jochem Hendrick's fascinating and elegant "eye drawings," which use computer scanning technology to produce drawn lines representing the paths made by the eye as it tracks the words on a page of newsprint, explores the all-over complexity of a painting, or fixates on a pornographic image. These are all ways of re- integrating the human factor as it is (rather than as we speculate that it might be in the future) into claims about "tectonic shifts" in perception and experience resulting from new technology (see John S. Weber's introductory essay, "Beyond the Saturation Point: The Zeitgeist in the Machine," p. 15). They are also arguments for the continued viability of precisely such seemingly antiquated and even outmoded media as drawing, painting, sculpture, photography and film in processing and perhaps even subverting the cultural implications of newer technology.

That said, it is all well and good to point to individual pieces with greater or lesser enjoyment. The problem comes in making sense of the exhibition as a whole. Certainly its primary aim seems to be to celebrate digital technology rather than to critique it (it is hard to ignore that the exhibition is underwritten by Intel, manufacturer of the Pentium 4 Processor-"The Center of Your Digital World"). In the name of remaking the museum to embrace new forms of visual culture, we also find the museum embracing its institutional role as a school for mimesis, a place where learning to take aesthetic pleasure in new technology becomes inseparable from softening the blow of adapting to the increasing proletarianization of both mass and elite culture that is this new technology's darker side (indeed the functional collapse of the erstwhile modernist distinction between mass and elite culture may be digital technology's greatest innovation and its greatest curse).

And then, of course, there is the benefit of hindsight. What are we now to make of the sense of millennial "zeitgeist" that gave rise to such exhibitions as 010101? If its implications are to be gleaned anywhere, it is perhaps some place between the Museum and the world "out there," between last year's boomtown mentality in the San Francisco Bay Area, and this year's ghost town of abandoned domain names, empty websites and the all-too-concrete "for lease" signs festooning the area's brick-and-mortar office spaces in the wake of the dot-com collapse-the future already in ruins. In his 1930 essay on "Theories of German Fascism," Walter Benjamin argued for "the gaping discrepancy between the gigantic power of technology and the miniscule moral illumination it affords." One of the few works to situate itself explicitly in this gap is Janet Cardiff's "Video Walk," a single-channel video tour of the museum that is experienced on a handheld video camera/monitor so that the tourist's visual and auditory perception of the "real space" of the museum is constantly compared with and collapsed into the fictional space of the taped museum "tour." Comparable in its haunting power to Chris Marker's futuristic fantasy "La Jetée" (1962), like "La Jetée" (a narrative film unfolded primarily through still images),"Video Walk" owes more to its canny exploitation of long-familiar technology than to any fundamentally new technological innovation (its effect of virtuality is all in the mind). In its blurring of perception and reality, and its confounding of the certainty of sensory knowledge with the ambiguity of mere illusions, "Video Walk" allows us to experience just how terrifying and mournful it may be to surrender the present to the future, and to give up the creature comforts of embodied memory for the seductive promises of a totally binary world.

Jeannene M. Przyblyski is an independent art historian and critic based in San Francisco. Her publications include The Camera on the Barricades: Photography and the Paris Commune of 1871, forthcoming from University of Minnesota Press. She is also founder and executive director of the San Francisco Bureau of Urban Secrets, an alternative arts project.