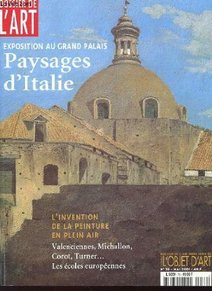 In a small painting, "The Artist in His Room at the Villa Medici in Rome", (Cleveland Museum of Art) the French painter, Leon Cogniet, Prix de Rome pensionnaire, shows himself leaning against his bed, reading his first letter from home. Around his monk like room are emblems of his occupation; a palette, a guitar, props for future history paintings - a helmet, shield, and sword - and a walking stick, hat and cloak, suggesting his excursions in the Campagna. Above all the window is flung open, framing two cypress trees and a stretch of Roman countryside, and filling the shadowy space with bright sunlight. It is an intensely evocative work, which seems to crystallise the interests of the painter in Italy in the early 19th century, suggesting both the lingering demand for historical compositions, and a growing passion for direct and spontaneous landscape painting, a vision newly revealed by the light and beauty of the South.

This work sums up the themes of the beautiful exhibition, "Paysages d'Italie; Les Peintres du plein air (1780 - 1830)" which opened in Paris and is now at the Palazzo Te in Mantua. Its aim is to bring to a wide public the delights of open air landscapes painted in Italy in the early Romantic period, works of bright freshness and charm, innovatory in their freedom of handling and unusual viewpoints. It suggests that these works mark the beginning of modern landscape; Italy itself, so physically beautiful, and yet so steeped in memory and allusion, seemed both near and yet far, and stimulated the birth of an art that was both objective and yet passionately felt. This is the climax to a sequence of exhi- bitions devoted to the practice of plein air painting; "In the light of Italy, Corot and Early Open-Air Painting" (1996; Washington, National Gallery of Art) anticipated it in many ways and some of the works now displayed - the Thomas Jones, Jacques Sablet's "Portrait of Conrad Gessner", sketches by de Valenciennes - are well known through this and other exhibitions. But "Paysages d'Italie" is larger and more am- bitious; it attempts to tell the history of plein air painting as a narrative, and, where only oils were shown at Washington, here there is a new emphasis on works in different media - drawings, watercolours, oil on paper. It is organised in a series of thematic groupings, some of which focus on the nationality of the artists, others on place, or vaguer catagories such as 'Landscape as a spiritual state'.

The exhibition opens with a bold claim for the primacy of the English, with a wonderful wall of melancholy watercolours by John Robert Cozens, and a magical group of oil sketches on paper by Thomas Jones. These two artists are utterly different. Cozens' landscapes, of celebrated Italian villas, windswept cypresses, the plains and hills of the Campagna, are original in their viewpoints, but their subjects are those of classical Italian landscape, and the beauty of their very subtle tonal modulations of greys and greens suggest an elegiac longing for a lost Italy and a nostalgia for the art of his great precursor, Claude Lorrain, who is himself said to have painted in oils from nature in the Campagna. In sharp contrast, Jones' sketches are untouched by any such nostalgia. His motifs, the walls, rooftops and unassuming buildings of Naples, are startlingly original, and his capturing of bright southern light, and the abstract play of the horizontals and verticals of windows and rooftops, create a powerful sense of revelation and discovery, of a world seen afresh; Jones himself lamented that he was born at the wrong time. A little further on is a group of very large and extremely highly finished and laborious watercolours by Giovanni Battista Lusieri, with whom Jones worked, and again the contrast could not be greater. The inclusion of these watercolourists, however beautiful their works, complicates the main thesis of the exhibition, that these years saw the birth of a new and modern vision; it lacks the homogeneity of its forerunner in Washington.

There follow large sections devoted to French, German and Scandinavian works. Amongst the German works, Heinrich Reinhold's fine study of Olevano, a small town discovered as a motif by Anton Koch, stands out, and there are some remarkable studies of sky and clouds by Johann Heinrich Schilbach. The Scandinavians are dominated by Christoffer Wilhelm Eckersberg, whose tiny "A Courtyard in Rome" (Ribe, Kunstmusuem) shows a view of an empty courtyard through a window. The window frame, a favourite Romantic motif, creates a powerful psychological effect, of discovery and mystery. Beyond the window the play of perspective, of rectangles, horizontals and verticals, of dark openings and sunlit spaces, has a compelling abstract and almost modernist power.

The thematic groupings of other kinds are perhaps less satisfactory, with the exception of a large series of views of Vallombrosa by Louis Gauffier, intended to show the artist's working method, and how he used his outdoor sketches for large scale studio works. The exhibition's prin- cipal organiser, Anna Ottana Cavina, stresses that at this date sketching from nature was not in itself subversive, as such sketches were not inten- ded to be sold as finished works, but to be used as the material for larger paintings. But the section devoted to Naples seems a little cursory, and overlaps uneasily with other areas without making any new points. Naples was surely the archetypal city of Romanticism, a city of myth and legend which evoked a subtle and complex response in the early 19th century, and it is too large a subject to be tagged on in this way. The Neapolitan works do however contain one extraordinary image; Pierre Catel's "A Window at Naples" (Cleveland Museum of Fine Arts), where, beyond an open window, a dejected dog enigmatically surveys a hackneyed view of Vesuvius. "Landscape as a spiritual state" seems equally un- focused, with pictures which could well have been in other groups, and which lack any homogeneity, fascinating though it is to see the strange and little known works of Giuseppe Pietro Bagetti.

In its later stages the exhibition seems to fall apart, and it is perhaps a little too big, and the repetitiveness of the subject matter begins to pall. But it closes with an extraordinary "Adieu to Italy" Martinus Rorbye's "A Traveller near the Acqua Acetosa" (Goteborg, Kunstmuseum). Here, beside the Acqua Acetosa, made famous by Claude and Poussin, a dark and melancholy traveller, a bundle of dead wood at his feet, bids goodbye to Italy, and becomes the emblem of the end of that tradition so charmingly evoked by Cogniet's "The Artist in his Room at the Villa Medici".

Helen Langdon is the author of "Claude Lorrain" (1989) and "Caravaggio: a Life" (1998). She is now working on artists in Italy and in 2000 was the Paul Mellon Fellow at the British School at Rome, preparing a study of artists and travellers in Romantic Naples.