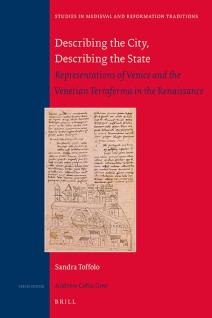 If you read the reports of late medieval pilgrims from north of the Alps, who embarked in Venice on their journey to the Holy Land, it is astonishing how much information they collected during their stay in the city. For them, legendary historical events played just as much a role as the wealth of the city, its political system, or its fortitude. The picture they paint in their reports was no product of coincidence. Rarely, a community of the time was so concerned with its self-image as Venice was, and the city tried to influence and shape her public image. Sandra Toffolo’s book deals with the perception and reproduction of these images in the 15th century, focussing on views of the city as well as of the Venetian republic. For the latter she concentrates predominantly on the relations between the Venetian mainland possessions in northern Italy (terraferma) and the city itself. The author grounds her study on a wide range of sources that focus on geographical and physical descriptions of Venice. These sources have not yet been evaluated systematically from this perspective. In addition to the aforementioned pilgrim reports, she also uses panegyric texts, popular poems or (graphic) representations of the city in manuscripts and early prints. The author’s objective is an ambitious one: she aims to capture the complexity and ambiguity of the narratives about Venice as a city and state, whilst at the same time showing their transformations in the period between the War of Chioggia (1378–1381) and the start of the war against the League of Cambrai (1509).

Especially in the first part of the book she achieves this in a remarkable way. Following a general introduction, she addresses and analyses various aspects of Venetian self-descriptions and of descriptions by others in four chapters. Research on Venetian self-fashioning is anything but new. Since the middle of the 20th century, historical and art historical research has coined the term “mito di venezia” to describe the city’s mythically exaggerated self-(re)presentations. However, Toffolo’s original approach of concentrating on geographical descriptions of Venice for her analysis (and thereby using the term “geographical” in a very broad sense) brings numerous new impulses to this field of research. It is striking how Toffolo, through her selection of sources, succeeds in revealing the very different and yet parallel valid narrative strands and, at the same time, shows them to be flexible and historically changeable narratives.

To a large extent, the author follows the themes established in the research on the “mito di venezia”. In her first chapter on Venice as a divinely chosen community, she explores the myths of the heavenly inspired foundation of the city, of its godly protection, and the particularly close connection to its patron, Saint Mark. Here, the merits of the study lie in drawing on little used and lesser-known aspects of the myth and pointing out the varying nuances in it. Unfortunately, the author misses the opportunity to question her sources regarding lesser-known myths and thus, for example, to take a look at the revival of the cult surrounding Saint Theodorus in the second half of the 15th century. The importance of this allegedly first town patron saint (who was said to have then been replaced by Saint Mark) becomes apparent, for example, in the construction of a new church by Giorgio Spavento between 1486 and 1491. It was dedicated to Saint Theodorus and prominently placed, directly adjoining the basilica of Saint Mark.

The full potential of the selected sources unfurls in the copious and multifaceted second chapter. Here, Toffolo examines the role of material culture in the descriptions of Venice. She shows that besides the outstanding location of Venice as a city on the water and its magnificent buildings, other forms of splendour contributed to the image of Venice’s uniqueness as well. Toffolo demonstrates that in her sources, clothing, the wealthy abundance of commodities and display of trading relations, for example, were equally important. At the same time, the author explains how state regulation of the urban social space and influencing of rituals and market ordinances could have repercussions on the descriptions of the city.

The contradictory nature of the variety of these images existing at the same time comes to the fore especially in chapter 3. Here, the author not only draws on texts praising Venice as free, ideal state with a just constitution and high morality. She also gives the floor to actors (such as, for instance, Enea Silvio Piccolomini or the Florentine merchant Benedetto Dei), who characterize Venice as immoral, unfree and violent. Consistently, the author also opens up unknown source material such as city views enclosed in manuscripts (pp. 83-92) or – in the fourth chapter – vernacular poems collected in cheap broadside prints and handwritten anthologies (pp. 181-188).

All this makes the book particularly attractive for researchers working in the field of Venetian self-representations. Especially for the analyses of art works and building projects, which the author regrettably leaves largely unconsidered in her sources, her explanations offer valuable insights. The numerous source citations and evidence provide substantial material and follow-up references.

In the second part of the book, Toffolo turns to a subject largely neglected in research so far: the perception of Venetian rule and expansion on the north Italian mainland during the 15th century. This perception was dependent on varying factors, first and foremost the authors’ backgrounds and interests. Venetian authors, for example, justified the conquest of Italian cities as liberation from unjust rule or tyranny, sometimes as voluntary submission, or they gave historical reasons for an annexation. Military campaigns (especially in Friuli) were also described as legitimate reactions to disrespectful conduct or as a necessary step of protection. Urban elites in Padua, Vicenza or Verona, however, tended to largely ignore Venetian rule in their descriptions of their cities. The Paduan professor Michele Savonarola, in praise of his hometown, even completely upturned the situation, and described Venice as a daughter of Padua. Finally, in accounts by pilgrims from north of the Alps, the power-political affiliations of Venice’s mainland possessions usually played only a subordinate role or were not understood at all.

Particularly in the second part, though, one of the biggest difficulties in the structure of the study becomes apparent. As much as the author's source-oriented presentation and her focus on geographical descriptions are to be welcomed in principle, one would sometimes like to see an embedding in other discourses or somewhat more comprehensive methodological-theoretical considerations. The section on the perception of the terraferma from a Venetian perspective would certainly have benefitted from an accompanying description of the governmental and institutional changes (and their perception) in the 15th century. The decision in 1420 in the Collegio – one of the innermost leadership circles of the Venetian state – to establish a governmental body specially for matters concerning the mainland possessions by appointing five “savi di terraferma” (and the perception of this change) would have offered an example. Also, one would have liked to have seen the idea of the terraferma as a territorial state enclosed by borders, actually somewhat anachronistic for the 15th century, accompanied by more general considerations of territorial rule at that time. This is all the more so, since with the increasing acquisition of land by the Venetian patriciate and the building of villas in the Veneto, an alternative form of land appropriation began to establish itself.

A second critical remark should be allowed with regard to the selection of secondary literature. Researchers from German-speaking areas might be missing a discussion of Corinna Fritsch’s thoughts on the cult of Saint Mark or Lukas Burkart’s analysis of the relationship between Verona and Venice around 1500.[1] But this is still understandable for a book which originated in the Anglo-Italian context. However, it is disconcerting – and unfortunately not an isolated case in English-language literature – that even when analysing German pilgrim accounts, the research literature in the language of the source is overlooked and even recent critical editions are not mentioned. Toffolo could have received important impulses, for instance, from the studies of Andrea Denke on the descriptions of Venice by German-speaking pilgrims or from Frederike Timm’s thoughts on the significance of Venice as a collector and distributor of (pictorial) knowledge about the city and the Eastern Mediterranean.[2]

But despite these points, Sandra Toffolo has succeeded in writing a highly inspiring book rich in sources, which opens up new and stimulating possibilities for understanding Venetian (self)images. Her emphatic reference to the polyphonic and contradictory nature of narratives about Venice during the fifteenth century and her analysis of the lines of development of individual narratives will enrich studies on Venice. Also, for the perception of the Venetian terraferma, long neglected in research, Toffolos study will provide significant impulses for future research.