Exotic? Switzerland Looking Outward in the Age of Enlightenment 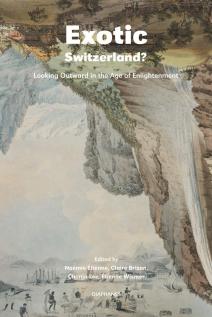 Since the Black Lives Matter protests in May 2020, the discussion about the entanglements between colonialism and Switzerland have entered the public sphere. Although the debate has been present since the beginning of the twenty-first century within activist and academic circles, such discussion was not even on the fringes of public consciousness. The exhibition Exotic? Switzerland Looking Outward in the Age of Enlightenment, curated by Noémie Etienne, Claire Brizon, Chonja Lee and Etienne Wismer, finds its place exactly at the crossroads of academic discussion and public mediation. Presenting the results of the long-term research project 'The Exotic? Integration, Exhibition, and Imitation of Non-Western Material Culture in Europe (1600–1800)' at the University of Bern, it looks to extend the dialogue around the coloniality of Switzerland, its history and its museum collections to a broad public.

In the grand staircase of the Palais de Rumine, visitors are welcomed to the exhibition by Uriel Orlow’s work Geraniums Are Never Red, a banner with a stereotypical Swiss cityscape. A lake, a castle-like building, and bright red geraniums construct the ideal scenery that decorates postcards in tourist shops around Switzerland. But as the title of Orlow’s work suggests things are not always exactly as we (think to) see them. The flowers decorating Swiss chalets are not geraniums, but pelargoniums, and their diffusion in Europe and Switzerland is entangled in the colonial endeavours of the Dutch East India Company at the Cape of Good Hope, in what is now South Africa. Orlow’s artistic intervention puts forward in a delicate way the colonial framework in which processes and devices mediate what could be considered ‘Swiss’ or ‘exotic’. Moreover, it highlights how the Enlightenment enabled the systematization and circulation of botanical knowledge, but at the same time participated in the process of partial destruction of specimens taking them from their original contexts. The exhibition Exotic? Switzerland Looking Outward in the Age of Enlightenment looks deep into this colonial system, and into the dark side of the Enlightenment raising the question how the exoticising gaze is constructed, performed, and displayed.

Visitors are rapidly confronted with their own processes of looking and thinking when they enter the first room of the exhibition (the scenography is by Atelier Frédéric Dedelley). The darkened room displays a diverse set of objects – from fossils, preserved animals, minerals, and plants to artefacts, ornaments, costumes, and statues. These objects come directly from the zoological, geological, archaeological, and historical collections located in Palais de Rumine. Visitors hear from the distance, almost as a whisper, voices in several languages, and if they are attentive will catch some of the questions that the exhibition discusses in its different sections: What remains from our travels? Can we consume without exploiting? Is science a kind of domination? Where do the images of the Other come from? The exhibition aims to show how the exotic is produced through different practices of representation and interpretation that designate a place to things from a particular subjective, political, cultural and historical position. The exhibition makes this explicit when they warn the visitors that representations of the seventeenth and eighteenth centuries convey 'a European supremacist perspective and materialize stereotypical conceptions of the time.' This kind of reflective and critical language is one of the strengths of the exhibition.

The second room is divided in four sections, titled Departing, Collecting, Exploiting, and Selling, and shown through a display system of islands, which creates an open arrangement of paths. Visitors are not forced into a specific direction, which permits them to create their own relations between the four sections. In this way, the scenography embodies the idea of entanglement at the core of its design. It shows how different themes are interrelated, highlighting the interconnectedness of different societies. As a consequence, visitors can understand that the collections and enrichment of the Swiss elite in the Enlightenment would not have been possible without the exploitation and domination of foreign territories. Scholarship has demonstrated Switzerland’s involvement in European colonialism and the exhibition Exotic? contributes to this argument.[1] It shows the material translocation of objects in Swiss collections within the global colonial framework and their influence in the practice of exoticising.

In Switzerland as in other European countries, the act of collecting was clearly connected to different colonial practices towards non-western cultures and their artefacts. Through the example of the tapa, Oceanian textiles made from vegetable fibres, the exhibition shows how some objects were fragmented or destroyed to be transported to Europe and were taken from their original contexts without any interest in their provenance. Consequently, the objects lost their own materiality, and forms of knowledges attached to them were completely obliterated. The best example of this kind of practice is the exhibit Nââkwéta which was believed by Europeans to be an axe but was in reality a symbolic artefact that distinguished the orator during Kanak ceremonies in the Pacific Ocean. The artefact’s label respects the indigenous term and refers only briefly to the term hache ostensoir (ceremonial axe) that has been used in different collections around Europe. Furthermore, the curators invited Denis Pourawa, an author and poet from New Caledonia, to produce an audio guide. Called Poésie sonore des gouffres (Acoustic poetry of the abysses), Pourawa’s contribution narrates a story and invites visitors to view the exhibition from his own, non-western, perspective. I would go so far as to describe this mediation practice – if only small within the exhibition as a whole – as a decolonial curatorial practice, which re-constructs and re-legitimates marginalised histories.

Exotic? also treats the ways things and beings are named and represented carefully. Its objects are not shown as innocent representative artefacts, but as complex signs that have an agency in the world. In addition, the interpretational position of such signs is not located within the discourse of European modernity, but within a postcolonial discourse. Consequently, dictionaries, drawings and maps are described as elements of colonisation practices. They support the exploration and exploitation of foreign territories and are used as central artefacts in the production of stereotypical images; in other words, in the construction of the exotic. Exhibitions of this kind run the risk to repeat and reproduce, involuntarily, these stereotypes, by exhibiting such images without contextualisation. Exotic? overcomes this danger with mediation texts that explicitly deconstruct the processes of exoticising others and that remind the visitor that such words or images are no longer used today because of their racist implications. In addition, the artist Senam Okudzeto intervenes with her digital film Disappearing Africans, in which she recalls the obliteration of people and their histories and experiences by slavery, by being painted black until she progressively disappears. As a result, the exhibition breaks away from such dangers and transforms them into possibilities to re-construct historical constellations and to set postcolonial positions.

In summary, the exhibition has a well-conceived main section dedicated to the processes of looking towards the Other in the Swiss Enlightenment. It displays a set of curatorial possibilities to bring such topics to the public in new ways. The objects are intelligently mediated through an entangled scenography and a critical conceptualisation in the description of objects, words and themes. Exotic? Switzerland Looking Outward in the Age of Enlightenment not only looks through a postcolonial lens at the history and collections of Enlightenment Switzerland, but also uses different editorial, curatorial, and mediation strategies that permit us to understand the colonial entanglement of such a history and to overcome the limitations of western representations in our language and ways of seeing.