Is Kant a prototypical postmodernist? And is Kantian philosophy still important to art and art history? How many Kants are there? These are questions that as an art historian and philosopher Mark Cheetham is probably well positioned to answer. His ruminations on these and other critical questions provide the matrix for this very readable and rich exploration of Kant's influence(s) on visual arts and art history from 1770's-1990's, the first reception study of its type to emerge from the academic industry connected to this paragon among philosophers. Cheetham's quest is grand indeed, and although some may question the "concurrency" (p5) of his critical approaches to his subject, or quibble about the unKantian/anti-Kantian manner with which he accommodates competing intellectual discourses and ideological positions, this book adds something new and provocative to the annals of Kantian scholarship

Kant is taken to be "a synedochic personification of philosophy in his interactions with art history and the visual arts". Cheetham further allegorises these relations as "analogous to those performed by a domestic boarder - a temporary and unwelcome lodger or visitor - whose presence "in" art and art history helps to explain the shifting borders between these areas." (6) This reviewer was reminded of Alfred Hitchcock's film The Lodger, another boarder, modeled after the infamous serial killer Jack-the-ripper who could perhaps provide another (nefarious) role for Kant (and his doppelganger) - a proverbial Jekyll to his Hyde. For Cheetham also likens Kant's critical counter-disciplinary behaviour (insurgency?) to a plasmatic agent; a Massumian blob, and oddly, after Deleuze and Guatarri, a heterogenetic rhizome builder. He argues that in this way, Kant is a subliminal figure, neither inside nor outside of space and time, "a Derridean supplement, a parergon in a perpetual process of self-definition." (7) The author's play with non-Euclidean tropes to describe Kant's relationship(s) to the visual arts and art history would be risible but for the depth of his research into the uses and abuses of the Kantian 'Critique' through two hundred years of aesthetic indoctrination. Each chapter informs and enriches our understanding of Kantian discourse as it has been subsumed within and re-contoured the visual arts and art history.

The book is structured into five chapters, the first functioning as an introduction, mapping out Cheetham's own intellectual provenance, and outlining his somewhat quixotic Derridean/Deleuzian approach (parergonal, plasmatics) to reception methodology which could be loosely characterised as an attempt to think outside the frame but in the body. Chapter two details the use made of Kant's political writings by German speaking artists and critics in Rome circa 1800. His third chapter explores Kant's influence on the development of aesthetic theory as it pertains to the generative art historical writing of Woffllin, Panofsky and other foundational figures. This chapter represents a Foucauldian influenced genealogy or archeology of intellectual authority legislated by Kant. Cheetham offers much evidence to support the reception of Kantian philosophy in late 19th and early 20th century and the embedding of his aesthetic theory within proto-modernist and modernist discourse. He revisits and re-assesses the influence of Kant on the critical writing (strategic formalism) of Clement Greenberg.

Finally, for this writer the most fascinating chapter "Kant's Skull: Portraits and the Image of Philosophy, c. 1790-1990", which is perhaps misplaced in the book since it provides one of the more interesting tropes - phrenology - subtending Cheetham's thesis regarding "the practical implications of Kant's legacy" for contemporary artists and art historians. The book is richly illustrated and should provide arresting reading across the disciplines. 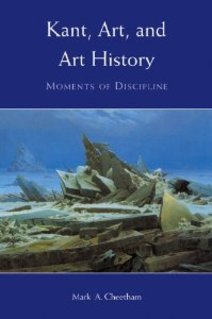