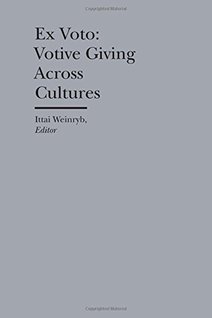 The present edited volume proceeds a symposium held in April 2011 at the Bard Graduate Center, New York City. This analysis of materially-mediated access to the divine across time and space is intended to inform an exhibition, entitled ‘Agents of Faith’, to be held at the Bard Graduate Center in 2018. The publication, and the project as a whole, reflects the institution’s commitment to scholarship that unites multiple perspectives and methodologies in order to shed light on material culture.

Ten monographic chapters on diverse themes are brought together, accompanied by an introduction penned by the editor. Images are interspersed throughout the text, and endnotes follow each individual contribution. The book includes a thorough index, uniting secondary authors, places, themes and creators. The term ‘ex-voto’ derives from a Latin formula meaning ‘dedicated as a result of a vow’. These objects are part, therefore, of a more or less contractual relationship between man and god. Comparison of the varied material manifestations of this relationship is at the heart of the volume. The E. introduces the topic with the idea that “a shared conceptual framework underpins the objects produced as part of the ritual of votive giving” (p.3). What unites the materials and periods discussed, and justifies comparison, is thus the motivation behind the creation or dedication of the object, rather than its form, material, or style. The final essay of the volume, also written by the editor, serves as a conclusion and fleshes out the methodological principles underlying the project. The volume espouses the method of the ‘Annales’ historian Marc Bloch, and it therefore pursues the discovery of likeness and difference through comparison (p.279). While the essays all focus on a specific context, practice, or era, the resulting contributions together cover a considerable time period (from classical antiquity to the late 20th century), span a wide geographical area (from Mexico to Japan, albeit with a strong focus on Europe), and discuss a number of religious traditions (the polytheism of classical antiquity, Islam, and Shinto are all treated, although Christianity predominates).

The strength of the individual efforts is in the depth of expertise that the various authors bring to their respective topics. The coherence of the volume is due to the themes that cut across the different time periods and ritual practices illuminated for the reader. Many of these underlying questions are present in multiple essays, and form the basis for our understanding of votive giving as a cross-cultural practice. One such question is the problem of seriality vs. individuality in the dedications. Alexia Petsalis-Diomidis, in her contribution ‘Between the Body and the Divine: Healing Votives from Classical and Hellenistic Greece’, suggests that anatomical votives (normally made of terracotta) could be mass produced, but that the marble reliefs found in the same sanctuaries were made-to-order and showed “an astonishing attention to individual circumstances” (p.51). This would seem to imply that the visually individualised products were preferred by those who could afford the more expensive material (marble vs. terracotta). A similar situation is described in Fredrika Jacobs’ ‘Humble Offerings: Votive Panel Paintings in Renaissance Italy’, in the context of Michel de Montaigne’s visit to the Madonna of Loreto in 1581. The famed essayist, arriving at the shrine, is presented with a vast array of objects pre-made from materials such as papier-mâché, wood, and tin, but in the end chooses a “made-to-order portrait plaque”, rendered in silver (p.143). The differentiation in production for objects of higher value is evident also in the case of the Japanese ‘ema’ paintings discussed by Hilary K. Snow in her essay ‘Donated before the Gods: Popular Display of Edo-Period ‘Ema’ Tablets’. Although in this scenario both categories of object are painted panels, the difference is between the large tablets, which were commissioned by a donor, aesthetically valued, and preserved, and the small ones, which were made in advance, inscribed only upon purchase, and burned at the end of the year (p.168). For those who could afford it, across many periods, a more visually individualised product was available, and often chosen by the buyer. Was such a product considered a more efficacious gift? Was this due to the visual differentiation achieved, or to the greater value of the commissioned object? The themes of accumulation and volume, and the evidence this provides for the effectiveness of the dedication, are also brought to the fore. The effect of the votive “ensemble” on the visitor to the sanctuary is underscored by Jacobs (p.140), whereas Hannah Baader’s ‘Vows on Water: Ship Ex-Votos as Things, Metaphors, and Mediators of Communality’ shows that the phenomenon of accumulation at a site can extend to include graffiti on the cliffs of the island of Malta (p.229). In these cases, it is the traces of previous pious visitors to the venerated site that prove its power, and motivate the addition of further objects or inscriptions. As a benefit was always desired by the donor, it is pertinent to consider why some objects and places were prioritised over others.

A third major topic concerns the role of mimesis in votive giving, especially as regards efficaciousness. Read together, the articles suggest that detail-oriented mimesis was not a necessary prerequisite, or in fact even preferable, for the correct working of an ex-voto. Jessica Hughes, ‘Fractured Narratives: Writing the Biography of a Votive Offering’, discusses the low mimetic accuracy of mould-made terracotta objects (p.38), Michele Bacci, ‘Italian Ex-Votos and “Pro Anima” Images in the Late Middle Ages’, stresses that surrogacy for the self could be achieved in materials like wax via indexes of the body, such as size and weight, rather than by mimesis (p. 79). The editor, in his chapter in the body of the volume, ‘Procreative Giving: Votive Wombs and the Study of Ex-Votos’, offers us the example of the toad as an ex-voto, a non-mimetic symbol of pregnancy, which evolved out of the dedication of models of uteri (p.292). Christiane Gruber, ‘‘Nazr’ Necessities: Votive Practices and Objects in Iranian Muharram Ceremonies’, complicates this picture by stressing the importance of the mimetic reproduction of the martyr Husayn in ‘muharram’ rituals in Iran up to the present day (p.264). Cognitive association is revealed to be the critical sine qua non of the effective votive, and mimesis is shown to be one of many techniques for achieving this.

Another undercurrent that flows through the volume is what might be called, for lack of a better word, theology. The relation between votive giving and institutional doctrine is not always clear, and is often extremely problematic. Gruber begins her essay with the “anxieties” caused throughout Islamic history by votive giving (p.246). Clara Bargellini, ‘Presence and Narrative in the Ex-Votos of New-Spain’, underlines the struggle of the Christian church in the New World against what were perceived to be idolatrous practices, such as dressing the image (p.209). Megan Holmes, ‘Renaissance Perspectives on Classical Antique Votive Practices’, deals with questions over the acceptability of the practice head on. The A. explores the range of reactions to votive giving in light of knowledge about often similar pagan practices. These include characterising ancient votives as “true gifts to a false Jove” (p.110), which acknowledges the validity of this form of worship.

These essays are based on the assumption, and justify the conclusion, that there are many shared concerns in the relations between humans and the divine across time. Consensus about the use of the terms ‘ex-voto’ and ‘votive’ would have made the similarities between practices, which are required at a general level for comparison to be worthwhile, more accessible to the reader. For some authors these were precise limited categories that required a vow (as the name implies), whereas for others an ex-voto was little more than an offering to the god. Deeper consideration of the boundaries of the term ‘ex-voto’, and useful sub-categories within the label, would have been helpful. Possible avenues might have included the difference between the ephemerality of a ritual, for example a sacrifice, and the longevity of an ex-voto gift, an object that will probably remain visible after the ritual of dedication has been completed. In addition, ex-votos are considered “humble gifts” (Jacobs), or of a “pedestrian nature” (Weinryb), at many places in the volume, while at other times gifts in silver and precious metals (e.g. Jacobs, p.143) are mentioned without comment. The united contributions stimulate us to question whether the differences we draw between “high” and “low” dedications had any ontological value in the periods being considered.

As a whole, the volume is a rich source of material for the individual cases and periods under discussion, as well as for the vagaries and commonalities of votive practice. The essays that broaden our view beyond Europe are some of the most valuable. The authors shine light on a class of objects that is all too often overlooked, even by scholars of the contexts in which they were dedicated. The number of difficult questions raised is evidence for the merit of the project and the excellence of the essays. This volume is an important contribution to the study of the ways men and women have used the material world to access the divine and to alter the conditions of daily life in their favour.