Pleasure and Piety. The Art of Joachim Wtewael 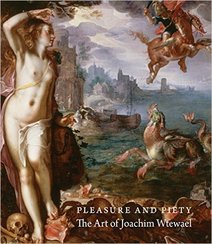 Joachim Wtewael was one of the most accomplished hobbyist artists of the Dutch Golden Age.[1] In retrospect, however, the wealth of this successful flax merchant “did not always prove a deterrent to talent and industry”.[2] Both Wtewael’s talents and industry are now the subject of a monographic exhibition touring three venues, accompanied by an elegant catalogue with essays providing a succinct introduction to the artist’s life, work, society, and historical reputation. The catalogue is the first book-length study on the artist to appear since Anne W. Lowenthal’s fundamental monograph of 1986.[3]

The revival of Wtewael’s art in the public sphere is a welcome addition to recent surveys of those star figures who occupy an art historical constellation dubbed “Dutch Mannerism”: Bartholomeus Spranger (in Prague), Hendrick Goltzius, Cornelis van Haarlem, Abraham Bloemaert, and Wtewael.[4] This artistic phenomenon was a highly flexible visual idiom which privileged the human figure and the many complex positions in which it could be depicted. Developed in Haarlem by Goltzius and Cornelis partly under Spranger’s influence, the style appeared in Utrecht by the early 1590s, where its dominant practitioners were Bloemaert and Wtewael. In “mannerist ideals”, as Lowenthal explains in the catalogue to the present exhibition, “style was a shifting and variable concept, to be tried on and explored in various permutations, rather than an expression with a deeply personal character.”(11) These ideals became largely unpopular in the mid-seventeenth century, and were all but forgotten by scholarship in the nineteenth century until about the second half of the twentieth, when in 1970 Wolfgang Stechow consolidated the main protagonists and presented their work in a exhibition which reignited scholarly interest, sparked museum acquisitions and the attention of private collectors.[5] Noteworthy in recent exhibitions - including the present one - is the absence of the complicating word “Mannerism” from the shows’ titles; the term has often been used to glue together a cast of characters whose artistic qualities and technical practices soon became quite different from one anther. Wtewael certainly developed a unique visual sensibility which remained available for collectors well into the seventeenth century, and the current exhibition does well by celebrating this uniqueness.

In Washington, where this reviewer saw the exhibition, thirty-six paintings and eleven drawings by Wtewael were displayed across three contiguous spaces. Although it was difficult to discern a rationale in the hang, the first room enticed by its glamorous large-scale canvases such as ‘Perseus and Andromeda’ (cat. 30; 1611, Louvre, Paris) joined by a group of sensitive family portraits and by some of his smallest, but definitely most exquisite, paintings on copper presented in two appropriately refined Beaux Arts display cases. Here, the visitor was given a cross-section of Wtewael’s personal milieu and his artistic diversity. Indeed, Karel van Mander praised Wtewael for his versatility in moving from large to small scale paintings, marvelling at the amount of detail in the shimmering hand-held coppers of profound compositional complexity - amazement flavoured by the fact that Wtewael was not professionally committed to painting.(4)

Wtewael became well-versed in the repertoire of classically-inspired figuration, having absorbed not only Haarlem’s artistic innovations, but also the cultural and artistic founts of Padua and Fontainebleau on a journey there in the late 1580s. He most often populated the surface of his paintings with gesticulating and intertwining nudes. Mythological scenes crafted in miniature on their copper panels retain a jewel-like sheen and precision afforded by the relatively nonabsorbent support. It is perhaps then not surprising that Jan van Wely, a seventeenth-century collector of Wtewael’s little bijoux, was a jeweller.(20) Wely owned one of Wteweal’s several depictions of the adulterous Mars and Venus ‘in flagrante delicto’. Many of the essays in the catalogue acknowledge that Wtewael painted risqué scenes, implicitly, but often explicitly, peppered with sexual innuendo.[6] Prized by contemporary connoisseurs, the esoteric subject of these works must have elicited a response equally as complex as the painter’s display of skill. In her essay, Lisbeth Helmus speculates that Wtewael may have even associated himself with the figure of Mars (18); yet, this would have appeared somewhat ironic to a contemporary viewer who, as James Clifton mentions in his contribution a few pages later, may have connected Mars with hatred for all things artistic and refined.(26) The association, however, with amorous activity in these works persisted over time, for the Getty panel (like many paintings and drawings by Wtewael) was censured with the installation of a hinged cover. By the nineteenth century, ‘Mars and Venus’ was concealed under a painting of a Violinist attributed to Gerrit Adriaensz. Berkheyde - the subject of music making being a subtle overture to subsequent romantic events (20).[7] It is no wonder that such works contributed to Wtewael’s fall in popularity during the modern rise of prudery.

Many paintings by Wtewael, and certainly all of the family portraits, remained in the artist’s possession at his death possibly on account of Wtewael’s situation as a businessman/artist, never needing to realise the market potential of a fully operational workshop.[8] The current exhibition has done much to draw paintings from private collections onto the art market over the past auction season. Over time, more will hopefully be flushed out to add to the ninety-eight paintings published by Lowenthal as autograph in 1986.[9] Perennial issues of attribution still emerge – ‘Judith and Holofernes’ (cat. 8; Art Museum, Princeton) is currently given to Wtewael, though a case could also be argued for Bloemaert - issues heightened by the existence of numerous high quality ‘replicas’ of his compositions. The second room of the exhibition offered viewers the chance to examine two versions of the ‘Adoration of the Shepherds’ side-by-side (cat. 24, 1606; Sarah Campbell Blaffer Foundation, Houston; cat. 25, c. 1606?; Rijksmuseum, Amsterdam); the prototype (apparently the Houston picture) generally exhibits more finesse in handling according to Lowenthal.(9) Beyond the physical comparison in the exhibition, and a few references in the catalogue, however, it remains unclear why so many replicas exist. Perhaps, as in the well-known case of Rubens, the lower quality of some of these replicas, possibly executed by Wtewael’s son Peter, were less expensive alternatives for potential clients. This much may have been the case with his drawings as Stijn Alsteens suggests in his lucid study of Wtewael’s draughtsmanship - the first since Lindeman’s 1929 monograph.(56) It is also possible that, without a commercial need, and as the inventories show, Wtewael retained his own prototypes for himself.

The last room - really an annex to the second - presented Wtewael’s efforts in graphic media. He did not engage in printmaking like many of his ‘Mannerist’ contemporaries. The group of drawings ascribed to Wtewael is even more fraught with problems of attribution than his painted oeuvre, so it is regrettable that the catalogue does not feature proper entries for each exhibited work. Alsteens speculates that Wtewael may have used compositional drawings destroyed during transfer to painting.(57) This might explain the number of extant ‘ricordi’, or drawings that were made after finished paintings. Of the secure drawings, the largest number of which date from the beginning of the second decade of the seventeenth century, his ‘Allegory of the Dutch Revolt: The Twelve Years Truce’ (cat. 49, 1612; Maida and George Abrams Collection, Boston) is a stunning example, exhibiting the artist’s accomplished skill in pen and ink and subtle gradations of washes on a par with his minute handling of paint on copper.

James Clifton’s introduction to the religious complexities of early seventeenth-century Dutch society reveals more clearly some of the seemingly unusual iconographic tendencies in Wtewael’s oeuvre. His large canvas of ‘Saint Sebastian’ (cat. 12, 1600; The Nelson-Atkins Museum of Art, Kansas City) whose dynamic pose recalls Michelangelo’s then often evoked ‘Haman’ in the Sistine ceiling, seems to encapsulate the social paradoxes of early seventeenth-century Utrecht: it is at once a boldly Catholic image and a blatant transgression of the Calvinist rejection of the so-called cult of saints. Indeed, Clifton emphasises that Utrecht was a religiously tolerant centre, and a work such as ‘Saint Sebastian’ contained an explicit “message of ecumenism and even confessional tolerance”.(29-30) Then again, Utrecht remained largely Catholic after 1580 and its image-makers, regardless their religious persuasion, surely catered to this clientele.[10] Accordingly, “there is […] a de facto ecumenical aspect to much religious art of the late sixteenth and early seventeenth centuries that owned much to market forces rather than (or in addition) to theological or ecclesiological conviction.”(29) Once again adaptability was key to the “Mannerist” project.(11)

The “range of options” that characterises the practice of “Dutch Mannerism” partly complicates the narratives once applied to Dutch art, narratives which in many respects maintain a hold over popular conceptions of what constitutes seventeenth-century visual culture of the Netherlands. Utrecht is but one centre where “Mannerist” tendencies continued to appeal to its more conservative clients well into the 1620s. Variety and adaptability were in fact important to the new open-market conditions under which much art was produced and consumed: Wtewael could offer “Mannerist” artifice paired with evermore fashionable naturalism in works such as ‘Perseus and Andromeda’ (cat. 30) where the serpentine figure of the heroine is staged above a detailed display of marine naturalia.(13 and 32) This amalgam of styles, it should be pointed out, must have defined many kunstkammers well into the seventeenth-century - Wtewael’s coppers rubbing shoulders with other artists’ landscapes, scenes of brawling villagers, or of exquisitely impossible bouquets.(59) The present exhibition has not only given an exemplary figure his due, but has also brought one more aspect from the extraordinary diversity of Dutch art to the attention of a wider public.

Anmerkungen:
[1] My thanks to Asbjørn Lunde and William Mitchell for their inspiring insights and jovial company.

[2] As Walter Liedtke quipped of another affluent seventeenth-century Dutch painter Paulus Bor (and by implication of Wtewael, too); Walter Liedtke: Dutch Paintings in the Metropolitan Museum of Art, vol. I. New Haven and London, 2007, 53.

[5] Wolfgang Stechow: Dutch Mannerism: Apogee and Epilogue. Poughkeepsie, 1970. As Arthur Wheelock indicates in his essay, The National Gallery of Art acquired Wtewael’s Moses striking the Rock (cat. 39, 1624) in 1971, in the wake of Stechow’s exhibition.(46)

[7] Possibly Job Berckheyde (Gerrit’s brother) is meant here, who was better known for exactly such works. On the subject of Dutch art, music, and love see Marjorie E. Wieseman: Vermeer and Music: The Art of Love and Leisure. London, 2013.

[8] Wheelock notes that “not one painting by Wtewael has been discovered in a 17th century inventory from Utrecht outside his own family.” (42)

[9] C.H.A.A. Lindeman published fifty-three as by Wtewael in 1929, see Joachim Anthonisz. Wtewael. Utrecht, 1929; of these Lowenthal attributes forty-three. Since 1986 about three dozen paintings can be added to this group (15).

[10] Wtewael was probably a Catholic when he traveled in the late 1580s to Italy and France. He was married in a Reformed Church in 1595, though as Clifton points out membership in the church was not required.(26, 28)